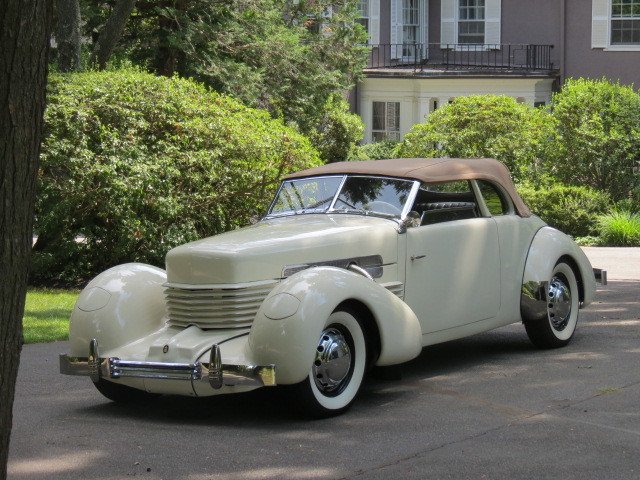 ** THIS CAR IS PHYSICALLY LOCATED IN NORTH ANDOVER, MA

What we have here is a stunning 1937 Cord 812SC Supercharged Phaeton with less than 500 miles on it since completion of an extensive frame-off restoration. The car is finished in Ivory, complemented by a Black Leather Interior and the correct Tan colored Canvas convertible top. Without a doubt, this will be the absolute best example of this car that you will find anywhere.

This 1937 Cord 812SC Supercharged Phaeton is Serial Number 32408H with body C91 653 which are correct as it came from the factory numbers. She has her factory-installed supercharger and as noted, the body, top and interior colors of ivory, black and tan are correct and as built. Regarding the numbers, 600 Phaetons were built, of which 196 were supercharged; this one is the 15th Phaeton from the end of production.

The collector who owned this Cord for several decades completed a body-off restoration over the period 2000 to 2004, in his own facility, in which he has restored both automobiles and wooden boats. The car was then stored in a dry heated building and little used. When the current owner purchased it in mid-2012, it had less than 500 miles since restoration, and he has used it only on special occasions since. Prior to purchase, the new top had suffered minor mouse damage and was replaced in 2013 by Jonathan Chase, renowned preparer of many Pebble Beach cars.

As stated, the car has been driven little since restoration, and appears as if restored yesterday. It is as immaculate underneath as it is above with the only known defect being the windshield-wiper motors which are not operational. As the car is never in the rain nor taken out when any rain is likely, this has not been completed; however, they are easy to repair as Trico rebuilds them at about $90. A well-known and common problem with 810-812 Cords is the gear change; the semi-automatic did not always operate as desired. In the case of this car, the transmission is perfect and outstanding in shifting effortlessly and without problem.

The current owner feels outside mirrors important in any car, and after scouring hundreds of photographs of 810-812 Cords and talking with other owners, he devised the best, if not only, means of mounting them without making any holes or other change to the car. This was accomplished by using an existing screw-hole on the windshield frame to attach a very thin piece of stainless which wraps around the frame and clamps at the frame/glass edge. A close-up shows this. Mirrors are mounted on both sides this way.

This 1937 Cord 812SC Phaeton is a spectacular vehicle being offered for sale here today. In Pebble Beach last year a similar car - but with incorrect colors - sold for $269,000 before buyer premium. As such, this car represents a real opportunity to acquire a pristine correct example, below the market. Please call Paul at (978) 771-8375 to discuss how to start the process of ownership transfer.

** THIS CAR IS PHYSICALLY LOCATED IN NORTH ANDOVER, MA